I recently completed a commission for Saint Apollonia, the Patron Saint of Dentistry. A gift for a retiring dentist, the plan was to build a 3D, assemblage piece, following the elements associated with Saint Apollonia. I have a little book of saints and followed the color scheme of red and green. 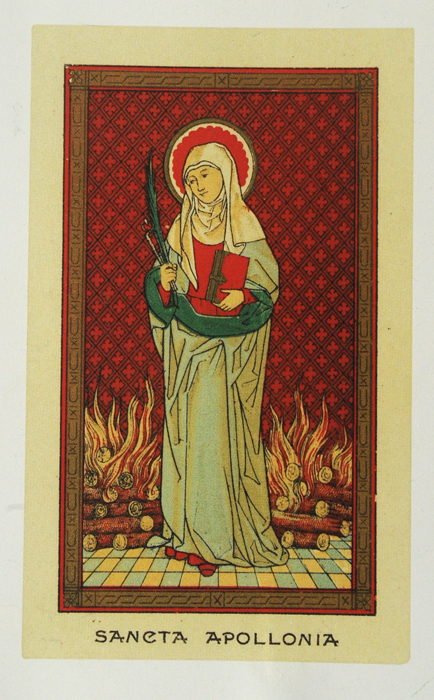 The back story is pretty gruesome, as are most saintly tales. Saint Apollonia’s teeth were broken as she suffered at the hands of torturers. It was demanded that she renounce Christ, or the torture would continue. If loosing all of her teeth weren’t enough, a fire was built and she was going to be burned alive, only spared if she obeyed. She asked if her torturers might release their hold on her and she proceeded to jump into the fire, unafraid of death. 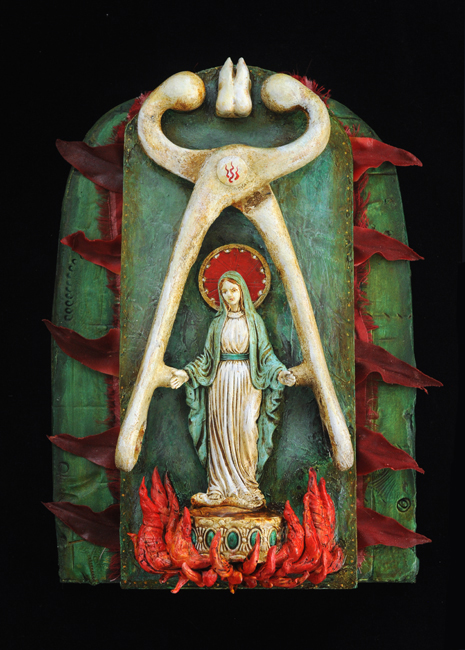 Always depicted with tooth extractors, a molar and fire, she heals those suffering from toothaches or other dental problems.  It was pointed out to me that the configuration of elements produces an A, something I failed to notice. This project was perfectly timed as I’ve been working on my “Saints and Sinners” show for fall.

You can find out more about which cookies we are using or switch them off in settings.

This website uses cookies so that we can provide you with the best user experience possible. Cookie information is stored in your browser and performs functions such as recognising you when you return to our website and helping our team to understand which sections of the website you find most interesting and useful.

Strictly Necessary Cookie should be enabled at all times so that we can save your preferences for cookie settings.

If you disable this cookie, we will not be able to save your preferences. This means that every time you visit this website you will need to enable or disable cookies again.